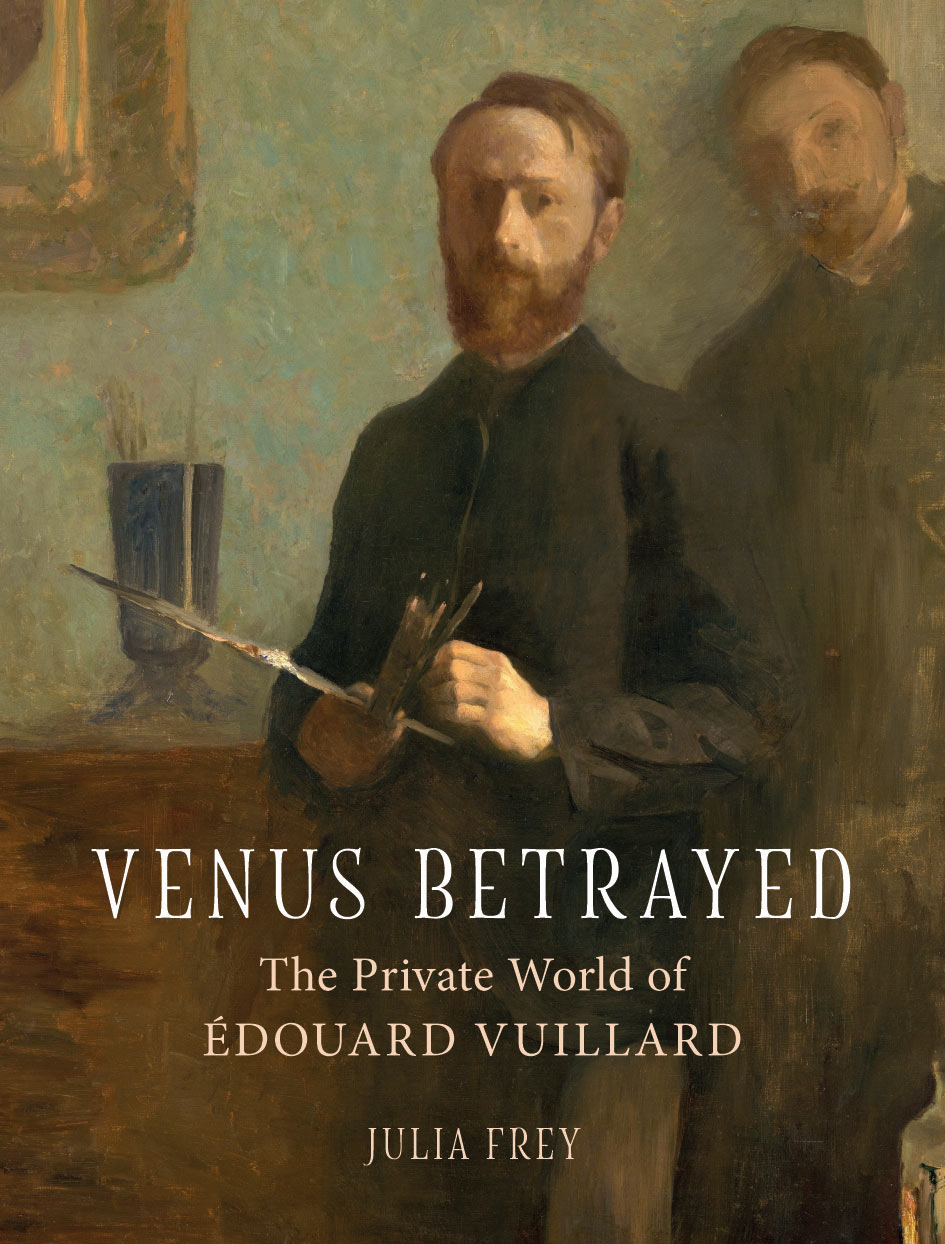 What if a brilliant young artist is offered a devil’s bargain: happiness—love, fame, freedom, artistic immortality—in exchange for abandoning his beloved, widowed mother?

The artwork itself tells the story of Parisian artist Édouard Vuillard (1868-1940), a man driven by hidden but intense, often conflicting passions, which he expressed in his art.

Édouard Vuillard (1868–1940) was so secretive that he berated himself for betraying his emotions in conversation. He was a reticent, impassioned man, a timid stalker and a social-climbing anarchist, caught between conflicting desires. From the 1880s until the advent of the Second World War, using styles from Academic to Pointillist to Nabi to Fauve, he abundantly revealed his love and hatred in his paintings: models pose beside a plaster torso cast from the Venus de Milo, women appear without faces and anxiety radiates from many of his masterpieces. Drawing on insights and images from Vuillard’s still unpublished diaries, Julia Frey takes the reader into Vuillard’s private world of cabarets, experimental theatres, holiday resorts and intimate boudoirs. 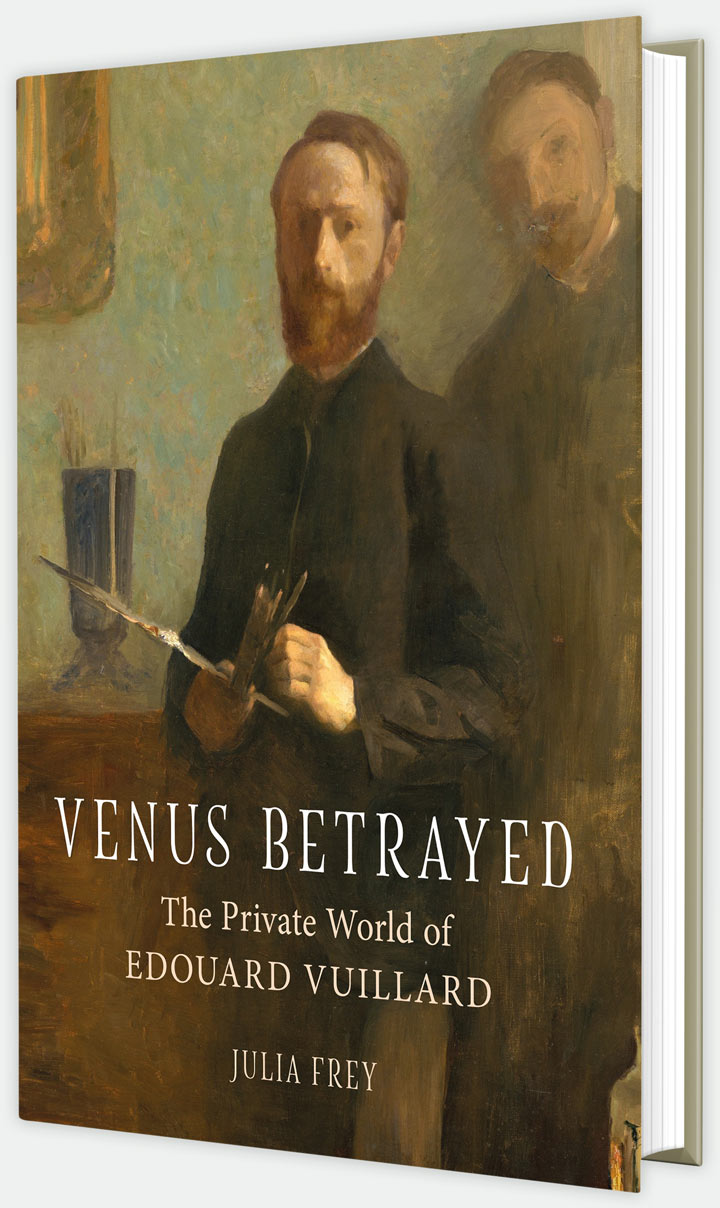 Born in Louisville, KY on July 25, 1943, Julia Frey, née Julia Bloch, had her first poem published before she knew how to write. She was disappointed because she couldn’t make it rhyme, but on request she dictated it to her Sunday school teacher, who submitted it to the church newsletter (presumably lost). Frey did not intend to be a writer. Her principal early interest was in getting out of the house. Too chicken to actually run away, she sublimated the impulse by becoming a voracious reader. This was the fault of her brother, who, embarrassed to discover his little sister had not learned to read in first grade, surreptitiously taught her on Superman comics. By second grade, she was disappointed to realize she could never read all the books in the world, or even in the school library. At age eight, reading marine biologist Eugenie Clark’s autobiography, Lady with a spear, she decided on a new escape. Despite never having seen the sea, she announced, “I‘m going to be an ichthyologist, and I can spell it!” She kept aquaria, raised tadpoles, peered at blind fish in Mammoth Cave. Actually she loved caves, too. Any different world would do. She acted in children’s theatre, playing the evil stepmother and the wicked witch across from beautiful blonde princess Diane Sawyer, who became a TV news anchor. Frey, unanchored, was more like ballast. Her parents, enthusiastic sailors, gave her sleep-inducing dramamine for seasickness and rolled her dozing body from bilge to bilge as needed.

Still desperate to leave home at fifteen, she applied to a foreign student exchange program. She was farmed out to a family named Schiel in Landeck, Austria. Transylvanians displaced while fleeing the advancing Soviet army in World War II, they had ended up in an abandoned freight car. She was impressed by their inventiveness and courage in adapting to conditions she could barely imagine, and by their generosity in welcoming a dreadful teenager into their home (by now an apartment). The Schiels taught her that anyone can unpredictably experience a reversal in circumstances, and that to stay alive, humane and loving, you have to be flexible, but absolutely refuse to give up.

She was living in a new universe. The customs of Louisville were alien to Landeck, and vice-versa. Rules, our pragmatic teenager decided, were irrelevant. She would judge each issue on its own merit. This was a convenient stance for the impulsive adolescent, somewhat less welcome to the adults trying to control her. All survived.

At Antioch College, her mathematician advisor informed her that budding ichthyologists had to pass calculus. Frey wisely replaced scuba diving with living abroad. She worked in Mexico as a puppeteer, sold sportswear on Mykonos and studied printmaking in Paris with S.W. Hayter at Atelier 17. As she went, she recorded her misadventures in small notebooks, thus learning that writing, like doing art and swimming over coral reefs, gave her hours of joy, focused on exploring what was before her, blessedly floating in the world of imagination.

But snorkeling, puppeteering and poetry were unlikely to earn her living, so still pragmatic despite appearances, she decided to go to graduate school. While at Yale, she married a symbolic logician, Roger Frey. They lived in Branford, Connecticut, overlooking Long Island Sound, sailing and peeking into tide pools.

Anyone can unpredictably experience a reversal in circumstances. By the time she was in her early thirties, Frey had accumulated a painful divorce, heterogeneous skills like Greek line dancing, rappelling and whistling, and, by absolutely refusing to give up, a PhD in French. The latter led to what she called her ‘day job’, an academic career that included teaching at Brown University, Sarah Lawrence College and, for 25 years, the University of Colorado at Boulder.

But Frey’s writing went very slowly. She struggled for ten years with her biography of the French artist Henri de Toulouse-Lautrec. In 1993, to her astonishment, her life-long distractibility and impulsiveness were diagnosed as a malady: Attention Deficit Disorder. She had to admit it must be true, because the medication she was given transformed her existence. Anyone can unpredictably experience a reversal in circumstances. She finished her book in six weeks, and Toulouse-Lautrec, a life won the 1995 Pen Center USA West Literary Award in nonfiction and was a finalist for the 1994 National Book Critics Circle Award in biography. She ran around signing books, giving lectures and showing slides. She curated several art exhibitions, notably Toulouse-Lautrec in the Metropolitan Museum of Art, at the Denver Art Museum (1999) and Toulouse-Lautrec at the Museo Vittoriano in Rome (2003–2004).

In Boulder she had met and eventually married her second husband, American novelist Ronald Sukenick (1932-2004). But she never changed her name to Julia Sukenick. Too hard to spell. Besides she was already publishing under the name Julia Frey. In late 1999 they both left the university because his long illness from inclusion body myositis increasingly required all their attention. In 2000, Frey and Sukenick, now severely disabled, moved to New York, to a specially equipped apartment in Battery Park City, across the street from the World Trade Center. Anyone can unpredictably experience a reversal in circumstances. Her journal of their life at Ground Zero during and after the 2001 terrorist attacks became her second book, Balcony View—a 9/11 Diary, which was a finalist for a 2012 Indie Discovery Award for memoir.

Widowed, she married again, and in 2008, moved with her husband, Dutch geophysicist Guust Nolet, to the French Riviera, where at last Frey, now Julia Nolet, could both see the sea and write full-time (but still as Julia Frey, although Nolet is easy to spell). Her most recent book is Venus Betrayed, the Private World of Edouard Vuillard — a biographical study of the French artist. She also writes an episodic humor column on French language, “Amuse-Bouche – Explaining French to Americans.” Anyone can unpredictably experience a reversal in circumstances, but she thinks it’s someone else’s turn now. 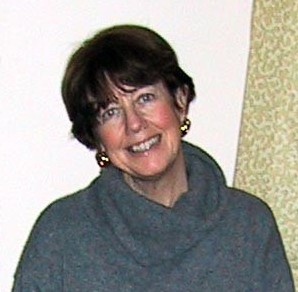